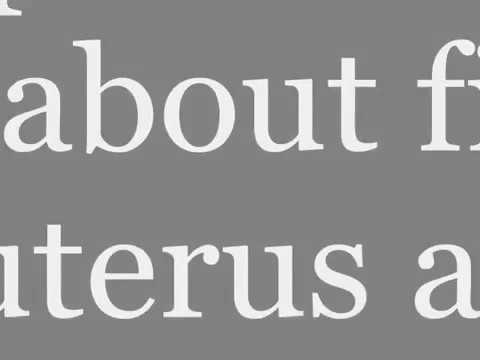 Uterine fibroids and ovarian cysts are both fairly common ailments affecting women’s reproductive organs. I’ve had experience with both. Unfortunately by the time I became fully aware of them, they were quite large, and I opted to have them surgically removed. But I’m hoping to find a holistic and natural way to prevent them from recurring. So the question is whether yoga or other alternative therapies can help.

Chances are you’ve heard of uterine fibroids. You may even have one or more. Uterine fibroids are fairly common non-cancerous growths in or around the uterus, the cause of which is officially unknown. According to The American College of Obstetricians and Gynecologists (ACOG) they occur in 25-50% of all women. Many women with them may not be aware of them, because they stay small and don’t cause any pain or other symptoms. For others however, fibroids grow to be quite large and can be painful or problematic.

In my case, I had one large fibroid that we thought was at least peach-sized. Knowing that it was my intention to start a family, my doctor suggested that it might be best to get that out of the way. Since fibroids are fed by blood and hormones, they grow during the course of a pregnancy. They can cause complications, increasing the risk of miscarriage, preterm birth or breech birth. I wasn’t anxious to experience my first surgery, and my doctor made me aware of several options. There are hormone therapies that aim to shrink or halt the growth of the fibroid, as well as several alternatives for surgical removal, depending on the size and location of the fibroid.

I initially chose the least invasive option offered, which was the use of a progesterone cream, which we hoped would shrink the fibroid. After 3 months, the fibroid was bigger instead of smaller, and my doctor found a large cyst that she was concerned about, so surgery became the next step. Part of me wanted to try alternative healing therapies, like Reiki, but I was also impatient and had little faith that alternative therapies would quickly dissipate a large growth. It turns out that my large fibroid was over a pound in weight and larger than a grapefruit. So I don’t regret the surgery, but I’d rather not repeat it, if I can avoid it.

From what I’ve read so far regarding yoga and fibroids, the first and foremost recommendation is that women with fibroids should not practice physical asanas during the menstrual period, as it provides more blood to the uterus and can make the fibroids grow. At other times, supported poses and gentle twists, similar to those recommended for prenatal yoga practice, can be good for alleviating pain and other symptoms. Like other health challenges, a healthy diet and lifestyle is recommended to avoid or alleviate the growth of fibroids. But that answer seems too generic, leaving me asking what more can I do to avoid more problems with fibroids and cysts in the future?

About the author: Wendy is a Certified Yoga Instructor with a focus on fitness, health and well being. She shares her knowledge and experiences at MostlyYoga.com. Thanks for reading!